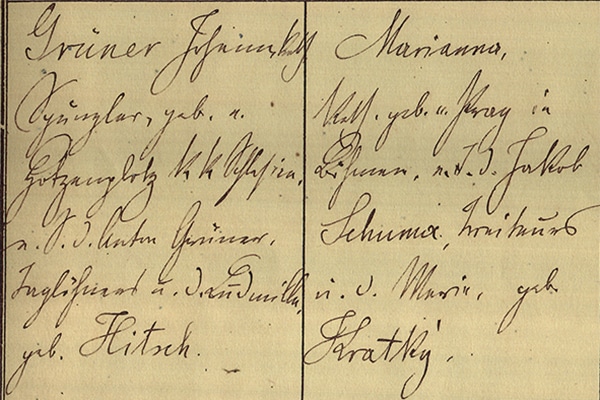 Transcription of old German handwriting and translation of documents into English. 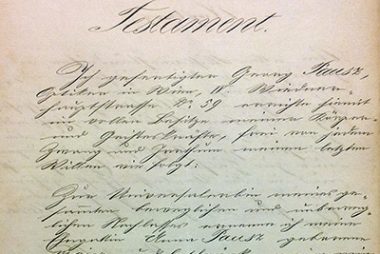 Herr Hammer,
Amazing! I am completely impressed by your thoroughness and presentation. I am still digesting this information, and am very excited to know this much more about my origins.
You stated in the report that you assess that more information could be found using additional research hours, so I would like to make this purchase. Same focus: identifying the ancestors of Eva as far back as documentation allows for.
Larry D.., HI, USA
We are so pleased with the results of your research! It was so frustrating to know nothing of Adele’s family, and you gave us a wonderful gift of remembrance of her.
If you ever need a reference - especially for someone in the US looking for information on their Austrian family - please let us know. I would love to let them know what a wonderful job you did for us, and that we give you the highest possible recommendation.
Diana L., MI, USA
Hi Johann,
Thank you very much for your excellent work! I really appreciate how easy it is to follow your research.
Everything is laid out very clearly. I was also impressed by how well you managed to make sense of unreadable handwriting. 🙂
So I am very content and grateful for your efforts. The research was a great Christmas gift for my mother.
Annika B., Sweden
Dear Johann, I just want to say a massive thank you to you, for your amazing work you have produced for me! You have made it even easier for me by choosing to translate everything into English! And all the information is set out in such a professional manner! I am so happy! You are a bloody legend mate!!! You have allowed me to further my family research, where I thought impossible and this is fantastic. I would love to continue using your services in the future without hesitation. In any case, thank you again for your efficiency of time, work and impeccable professionalism with my family history.
Steven I., Australia
Previous
Next

From September 1, 2020, eligible direct descendants will be able to claim Austrian citizenship at an Austrian Embassy, an Austrian Consulate General or with the relevant authorities in Austria to initiate the proceedings.

In order to be able to submit this application for re-acquisition of Austrian citizenship, several documents are required (see on the right).

We support you in obtaining these required documents from authorities, archives and parishes and establish contact with the responsible authority in Vienna (Municipal Department 35).

The link to the website of the „Federal Ministry for European and International Affairs“:
Declaration purs. to § 58c para. 1a

According to the Austrian Citizenship Act, a person shall be deemed “Victim of the National Socialist regime” (hereinafter referred to as “persecuted ancestor”) if, as an Austrian citizen or as a citizen of one of the successor states of the former Austro-Hungarian Monarchy or as stateless person, with principal residence in the territory of the Republic of Austria, he/she left Austria before May 15, 1955

It is therefore necessary to enclose the following documents concerning

Get in touch with me via my  ‘Contact’ page!

ÖFR - Austrian Society for Research on Genealogy and Regional Heritage

Austrian Society for Genealogy and History